Life of Pi & The taste Of Khichdi :-) – Dr. Medhavi Jain
Skip to content Skip to sidebar Skip to footer 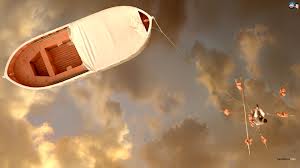 I tell you a boring dish like khichdi (porridge) have never tasted this better, as it was yesterday night. I took the first bite & closed my eyes, as if feeling every particle, every aspect of its taste. It was blissful!

Then I thought of Pi. How tragic his life is. A 16 year old boy, who is the only survivor of a shipwreck. He had lost all his family, is on a life boat & to add onto his misery (or probably blessings) surprisingly he is accompanied by a 400 pound Bengal tiger, whose name is Richard parker.

The boy who survived 227 days at the sea. Who is a vegetarian & very religious. But how this journey made him an expert fish catcher, that too with bare hands. He hunted, killed & ate as big as 5 feet long fishes, sea turtles, crabs & many other disgusting things. He looked after his fellow companion because he knew that he is the one who is helping him keeping alive.

Who faced the worst of the storms at the sea & survived. When he is hungry, in the middle of the pacific, he imagined large amount of food, food as big as India. A chapati which is the size of Rajasthan, Dal flowing in form of river Ganga, his idli as big as UP & his ice-cream as huge as Himalayas. He dreams about these things, feel their taste in his mouth but as he forward his hand to grab a bite, he finds nothing.

I was quite indulged in this book “Life of Pi”, by Yann Martel. After reading about his struggles throughout the day, I feel blessed when I came back into my world. And it was then when I tasted my khichdi. No wonder why it felt so delicious.

Hats off to Mr. Ang Lee who have succeeded in creating the same magic in the movie also.

Thanks for your time friends.

Have a blissful day ahead!!!

A Message From The Setting Moon