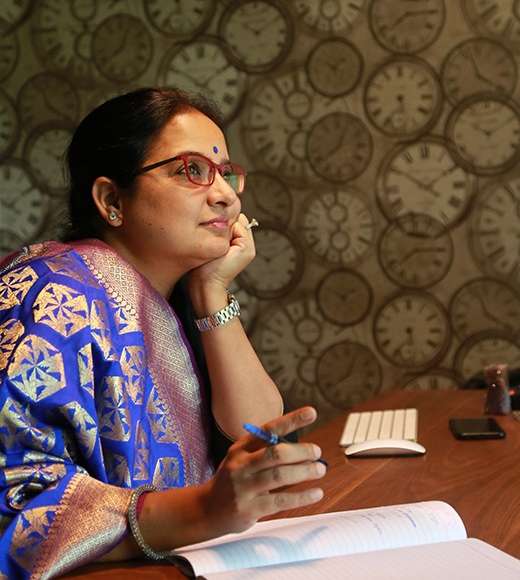 There is nothing in the world which one can search again. Every invention, each discovery has been searched, looked at numerous times in the past.

One can only research for one’s own satisfaction, to provide answers to one’s own queries, to get rid of one’s own restlessness. In turn one’s research inevitably provides answers to many questions others are seeking for.

For me my research is nothing but an honest attempt to satiate my quest for knowledge.

International Scholars: Influenced By Jainism
Whenever one is used to of something since birth or early childhood, be it one’s own culture, values, tradition or religion as in this case, then it is taken for granted, becomes stereotype and may not attract the same value, interest or newness by one’s own attitude. Then one may get interested and attracted towards other avenues. I think this is the current scenario of Jain philosophy in our country. There is a genuine and an urgent need of revival of interest, attitude and understanding by Jain philosophy’s disciples in our own country first and afterwards on a global scale. As Jain philosophy seems to be very tough to be understood, generally our own people do not try to go into its depth and decipher its true worth. In contrast there are a few westerners, scholars from other countries who have dexterously gone through the Jain philosophy, grasped it in a more diligent, unbiased way and honestly dedicated their whole lives to spread its true message. This has happened because somewhere they have understood the core, the gist of the matter and how it can satiate their rational quest for Truth, God, Karma, Universe and the ultimate purpose of life. You can download the paper from here:
Download Research Paper
Why Jainism is The Least Acknowledged Philosophy in The World
Despite being the oldest philosophy of the world, Jainism fights for recognition today at a universal scale. Though it’s followers spend huge amounts of money for its spread but still there is something which is, perhaps, not right. I’ve tried to throw light on the reasons of the same. You can download the paper from here:
Download Research Paper
Relevance of Jain Karma Theory in Context of Self Improvement
When one starts thinking about life and its happenings as nothing but sheer natural law, acceptance towards life is welcomed by one. Contemplation about the consciousness and its attributes, one’s ultimate goal and karma may fall under this category along with many other thoughts. In this context when one comes into touch with Jaina Karma Theory, one feels relieved that this is what one was searching for, till now. The minute way, the karma philosophy has been discussed and elaborated in Jaina Darshan, is commendable. When I tried to engage the same topic with modern issues, I was mesmerized that how wonderfully the Jaina Karma Doctrine can solve one’s queries about looking at occurrences of one’s life. In modern times when the religious philosophies have been selfishly molded into the favor of humans, where they are bound to bow their heads in front of the irrational God, out of complete fear; this philosophy teaches us to be independent, free and answerable to the self. In this paper I have tried to throw a light on Jaina Karma Theory, by describing briefly about what is Karma? How does it get bonded with the soul? How the process of shedding the heavy karma particles takes place? And how accumulation of lighter karmic matter helps the soul to attain higher, knowledgeable dimensions? How important is it to know that the higher the intensity of performing a particular karma, the longer will be its duration of sticking with the soul. How karma are related to personal ethics of a human, where does free will stand and how through understanding karma, we can improvise ourselves to make this world a better place for us and for the generations to come. You can download the paper from here:
Download Research Paper
Understanding Mind Through Jainism
I’ve tried to compare the modern perspectives of mind with what mind is in Jain philosophy. You can download the paper from here:
Download Research Paper
Modernity, Postmodernity & Jainism
I truly believe that religious philosophies teach us to be immensely modern. Unfortunately they have been moulded and described by humans in favour of their own selfish motifs that they seem orthodox. You can download the paper from here:
Download Research Paper
Evolution Through The Lens of Soul’s Journey and Time Cycle In Jainism
When we think about the theory of evolution, one thought creeps into every thoughtful mind for sure that if we have evolved through apes (like beings), this evolvement will not stop here? At Homo sapiens being the most modern, most developed, strongest, wisest version. For evolution seems to be a continuous process and definitely in future as per the survival of the fittest, and ironically even the most powerful as well, we will evolve into some other, even better species! Well without a doubt it sounds immensely positive and hopeful.

Till now we look at the sequence of evolution as (beings similar to) apes which have evolved into Homo Sapiens and will continue to do so until perfection. Hypothetically we can have a look at this sequence through exactly the opposite perspective, which leads us from being the most developed Humans to present day Homo-Sapiens through devolution and if this devolution keeps occurring with the passage of time Homo-Sapiens will devolve into (beings similar to) apes. In either case evolution and devolution do not seem to be stagnant or permanent processes and even if the pinnacle of either of these will be achieved, it won’t stop even then, for change is the only constant in the universe. This thought/idea leads to a cyclic pattern of occurrences, which provides base for further research.

Modern science has only analysed the previous scenario whereas it should have been looked at both ways; for the present day scenario of exploitation of domesticated animals, unethical use of armaments and finances, man’s hunger to attain power and quest to intrude into the workings of nature through experimentations of Artificial Intelligence etc. portray a different, fearful scene in front of our eyes. Also, if survival of the fittest is valid and right, due to the increasing population of human race and enhanced disparity, that day does not seem far when the more powerful humans start to massacre the less powerful ones in order to maintain the population of their beloved planet.

In this paper an attempt has been made to reflect this theory through adding consciousness and then by trying to analyse the same through the glass of time cycle in Jain philosophy, which indicates that what we understand as evolution, is actually devolution. We may hope that something very interesting and worth noticing is found. You can download the paper from here:
Download Research Paper
Zero and Infinity in Mathematics: Ayoga Kevalī and Siddha in Jain Philosophy
There are few subjects which accompany the consciousness at all times irrespective of its level of awareness. Mathematics is one of them for without it no action is possible but ironically it still remains a subject of worldly affairs and not of the ethereal. Like truth, mathematical concepts too are innate parts of nature and exist objectively irrespective of humans’ quest to seek for them. For example: seasons change after a certain period of time, leaves fall and then burst out at exactly the right time of spring, flowers bloom etc. Similarly, all numbers have always been there in their totality, and in partiality, without humans being aware of them. Also, numbers portray a certain amount of a given thing or situation which is always physical but mathematics is philosophical too and all the numbers, including zero and infinity, somehow have their abstract states as well. “For Plato, the complicated realities around us are, in a sense, shadows of perfect mathematical objects that exist quite separately, in the abstract world of mathematics. In that world, shapes and other geometric objects are perfect – points are infinitely small, lines are perfectly straight, planes are perfectly flat and so on.”1 Visit a desert, you will see sand dunes with beautiful patterns; visit the sea bed, you will find the same patterns. Nature works in patterns, some patterns are easier to understand while some seem impossible to decode, but there is a pattern behind each occurrence of the universe for sure. Mathematics needs to be understood and studied to evaluate each of our life’s happening from tiny to big. We can contemplate that if there can be different types of zero; as zero is always considered as a Dumbo whereas in reality it is the superhero. Perspective changes the way we look at a particular number, and in this context zero can be considered both zero and hero. When we contemplate about infinity, we consider it as only one and we don’t divide it further; however in the Jain philosophical text Dhavalā there is mention of eleven types of infinity.2 Hence we must keep our mind open to newer ways of approaching Mathematics. In Jain philosophical text Gommaṭṭasãra Jīvakãṇḍa, authored by Ācārya Nemicandra Siddhāntacakravartī, two types of Mathematics have been mentioned: “laukika, which is used to measure the physical and smaller aspects of the substance and alaukika, which is adopted to measure the micro and infinite dimensions of the substance”.3 Still we can only grasp a tiny part of it as like truth even Maths is a subject to be felt and even here the numbers work as mere signposts. We see many passionate teachers who teach Mathematics, a subject only a few are comfortable with, with different, easier and more creative approaches. This way, we can say that we all are equipped with it; we only need to find our very own unique way to understand this beautiful and philosophical subject. It is the most important subject of our lives, which provide a whole array of research to decode the patterns hidden in the universe. Just like the zero and infinity can be compared with the states of the ayoga kevalī and siddha respectively. You can download the paper from here:
Download Research Paper
Role of Jain Philosophy in Strengthening the Professional Ethics in its Adherents
General knowledge about Jainism depicts that it is a religious philosophy, where the main attention is on renunciation, non-possessiveness and following of the ethics. But when one sees around and observe the Jain laymen, this notion appears to be wrong. For, despite being very fewer in population, they are one of the wealthiest communities of not only India but also in the world. However, study about the ford makers who, from time to time, have reformed the already established regulations for the ascetics and the laymen, expresses that all of them were from the royal lineages. They have not only experienced the peaks of finances but also have wellanalyzed the pros and cons of it, have taught the consequences of overtly attachment with it, to their disciples. Along with the ways through which finances should be earned, keeping the best of ethics in mind. And when they were succeeded in overcoming it, they left it and went into the search of peace and truth. This way money does not sound bad and even possessions seem fine. This paper will throw light into few of these Jains’ lives, how they think about money and act in their jobs/businesses; how they keep ethics in check, how they feel that aparigraha is necessary for spiritual upliftment or to proceed onto the journey of self-improvement. You can download the paper from here:
Download Research Paper