Being a judge at a poetry competition – Dr. Medhavi Jain
Skip to content Skip to sidebar Skip to footer

Being a judge at a poetry competition 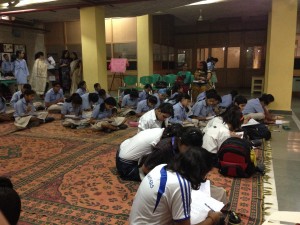 The occasion was India’s first home minister, Sardar Vallabh Bhai Patel’s 139th birth anniversary, which was decided to be celebrated as Rashtriya Ekta Diwas.As I was entering the school’s main gate, I was a bit hesitant as it was my first experience. But I were thinking that it is going to be a new learning to be added to my journey. I told the guard that I am here as a judge. And I was surprised when the guard answered me in English, he welcomed me & said,’ma’am if you want, you can wait here.’ He meant till someone comes to receive me. I smiled appreciatively at his efficiency.Then I saw two girls from the ‘students on duty’ came forward & welcomed me along with the teacher I knew. These girls escorted me throughout my presence at the school. I must admit I felt overwhelmed. As I entered the school I could feel the youth energy flowing abundantly everywhere. Waiting to get moulded, to be guided. I thought one day I would really like to work with them. 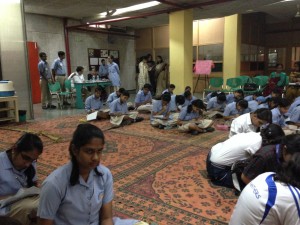 I first attended the school assembly standing amongst the children & felt great. After the assembly, the principal gave a short, motivational & influential speech, which I heard like a student. After that all of the students spread into different directions to move towards their respective places designated for separate competitions. And those two girls escorted me to the place where the Hindi poetry competition was to be held. Over there I met the other judge, who is a Sanskrit professor at a government girls college in Gurgaon.I was glad to see that there were almost forty students from classes 7th to 10th, including a few children from two other schools as well. As I sat on the judge’s chair, I felt a great sense of responsibility. The students were given three topics, out of which they had to pick one of their choice & had to write a poem of 10-12 lines in the given 20 minutes time. When they were done, one by one they came on the stage to recite their poems. We had to judge them on four criteria: relevance, expressions, confidence & expressions. I heard each of them attentively. After that I, along with the other judge, took the best marks from both of us’ sheets & added them to decide the first & second position.They called me on the stage to announce the winner. I was a bit nervous but I knew being a poetess, I have to give them some poetry tips honestly. I first thanked the school authorities for inviting me. Then I said that I am glad to see you many in numbers as there is a lot of work to be done in the field of hindi poetry and you are the future & it’s great that you are taking interest in it. Then I told the children a little about writing poetry. I said, ‘a poetry should be like a river, just like a river flows flawlessly, a poetry must be flowing. It must have a message in it. There must be a proper beginning, middle & an end, rhyming is also equally important. I told them it is not easy to write, not everyone can, because for writing a poetry one has to be in sync with the universe, so that one can pick just the right words from the stream of thoughts flowing into the cosmos. Use of selectively chosen words should be there & one can use a lot of synonyms as well.’ Then I announced the first & second winners, called them on stage, told them why they have been chosen.We were told that the selected poetry would be uploaded on the CBSE website. I was happy that behind that uploaded poetry, my judgement would be there.This way I thought I did justice to my being a Judge.Besides all this I gone through many other tiny feelings & emotions, which I would share some other day.Thanks for reading my experience. Have a great week ahead friends!!!Medhavi 🙂

I Am The Absolute…