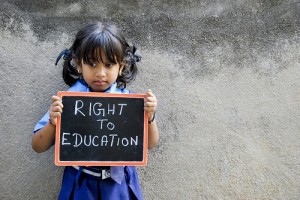 When we hear this term, we think what a great initiative. Indeed it is. According to wikipedia: The right to education is a universal entitlement to education, recognised as a human right that includes the right to free, compulsory primary education for all, an obligation to develop secondary education accessible to all. It encompasses the obligation to rule out discrimination at all levels of the educational system, to set minimum standards and to improve quality of education.
But I must say the reality is different. Recently I visited some governments schools, in a metro city, and talked to their teachers. They seemed frustrated. They said,”Now we can’t deny admission to any child, we have to take him in irrespective of his behaviour and conduct. If he is capable of being in grade 6th, but his parents want him to be in 8th, we can do nothing but to make them understand that please put your child in a lower grade, if they agree, it’s fine; but if they don’t, we have to admit that child in 8th. Plus, there is a rule now that we can’t fail a student till class 8th. So, if a student doesn’t want to study at all, he can reach up to level 9th, whether he is capable of writing even a word or not.”
Now I understood why a grade 8th student from a government school in M.P. came to our school was unable to write his own name. Isn’t it surprising?
They even told me that earlier students used to be afraid of being beaten up by the teachers but now this is banned too. ( which is good according to me ) Now the students are completely free to roam around, they leave the school whenever they want. We can not say anything to them.
They belong to families where either both the parents are working as labourers or if the father is working, the mother is illiterate and hence is unable to get hold of the child. So, they get ready for the school and leave their homes, but instead of coming to school they go somewhere else. I visited the boys school, which is from 6th to 12th. The teachers said,” the girls school is at a walking distance from here, some boys go there and stand in groups in front of the gate to eve-tease the girls. Sometimes we even have to call the police. The parents also don’t come for PTMs.”
I asked them,”we want to do something in the field of education, is there anything we can do?” He replied,” we have teachers, infrastructure, toilets, potable water, mid-day meal, the government even provide uniforms, books and school bags as well. If you want to do something please motivate the children and their parents. Through motivation at least some change can be expected otherwise all this is not going into the right direction.”
I answered,”okay, let me plan out some workshop for them and I’ll be back.”
While coming out of the school I was thinking, Right to education, is it good or bad? The government is doing so much to educate the poor but are they responding too? What is the missing link? Is the government suppose to motivate them and their parents as well?
Is it a failed project to show India 100% literate on a global scale or else? What would be the domino-effect* of this right? A country with educated illiterates?

*The domino effect is a chain reaction that occurs when a small change causes a similar change nearby, which then causes another similar change, and so on in linear sequence.

Thanks for your time friends, have a thoughtful evening!!!
Medhavi

The Food Code Badly Needs To Be Decoded