No! It’s Not About Money… Not At All… – Dr. Medhavi Jain
Skip to content Skip to sidebar Skip to footer

No! It’s Not About Money… Not At All… 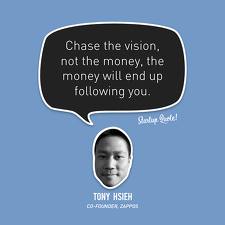 I’ve been observing it since a long time. Generally people talk about rich people with this thinking that they are crazy after money. But I don’t agree with this. No, not at all. If it would have been about money only, no one would have bothered so much, no one would have worked this hard to achieve a certain level. Have we ever thought how much one works hard to attain a level in the society? And that person alone take along how many people towards growth? It can’t be called only one man’s growth or journey. If we talk about big businessmen or celebrities, we’ll find them rich of course; but we will also find them truly dedicated towards their work. And the owner of any big company gives employment to thousands of people and this way their families are also connected with that company. And if we try to find even bigger contribution, that man is serving the society & then the nation at large. No,he can’t take this headache just to earn money. Because the bigger a man’s business is, the bigger are his tensions.

But gradually this has become the rule of our society that we have to gossip. Hard work is hard work until we are doing it, but others’ hard work seems as if they got it as a piece of cake. And this even become worse if we are facing financial issues, the we find rich men even more vulnerable to point, by saying,” he must not have been through any financial crisis ever. How does he know the value of money?”
Recently I’ve been reading and having some different experiences about the rich & famous. Sharing few of them.

So, my conclusion is that it’s not about money. Rich people are the ones who challenge themselves, who take risks, who strive to bring out the best in them, who never accept defeat, who are self motivators, who are passionate about their work.

It’s about achieving one’s self, achieving the higher, noble goal, which serves not only the society or nation but to humanity.
Hope you would agree pals.
Have a relaxed weekend ahead!!!
Medhavi 🙂

Due to travelling I’m unable to post blogs now a days. And I’m missing it a lot. Will post my next blog on 24th of June. Thanks everybody for reading them & motivating me. :-)