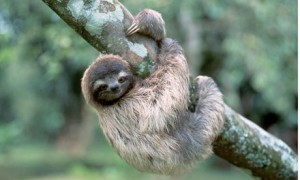 Just started reading “Life Of Pi” by Yann Martel and surprisingly in first two pages only got to know about this cute animal called Sloth. They are medium sized mammals found in the jungles of central & South America.

Sharing exactly what I read about these cute, saintly animals in the book. The author has written this book on behalf of another person named Pi. He has written that he chose sloth for his zoology thesis because its demeanor- calm, quiet & introspective did something to soothe my shattered self.

There are two-toed sloths & there are three toed sloths, the case being determined by the forepaws of the animals, since all sloths have three claws on their hind paws. I had great luck one summer of studying the three-toed sloth in situ in the equatorial jungles of Brazil. It is a highly intriguing creature. Its only real habitat is indolence. It sleeps or rests on average twenty hours a day. The sloth is at its busiest at sunset, using the word busy here in the most relaxed sense. It moves along the bough of a tree in its characteristic upside-down position at the speed of roughly 400 meters an hour. On the ground, it crawls to its next tree at the rate of 250 meters an hour, when motivated, which is 440 times slower than a motivated cheetah. Unmotivated, it covers four to five metres in an hour.

The three toed sloth is not well informed about the outside world. On a scale of 2 to 20, where 2 represents unusual dullness & 20 extreme acuity. If you come upon a sleeping sloth in the wild, two or three nudges should suffice to awaken it; it will then look sleepily in every direction but yours. As for hearing, the sloth is not so much deaf as uninterested in sound. Beebe (1926) reported that firing guns next to sleeping or feeding sloths elicited little reaction.

Precisely be being so slow. Sleepiness & slothfulness keep it out of harm’s way, away from the notice of jaguars, harpy eagles & anacondas. A sloth’s hairs shelter an algae that is brown during the dry season & green during the wet season, so the animal blends in with the surrounding moss & foliage & looks like a nest of white ants or of squirrels, or like nothing at all but part of a tree.

The three toed sloth lives a peaceful, vegetarian life in perfect harmony with its environment. A good natured smile is forever on its lips. I have seen that smile with my own eyes. I am not one given to projecting human traits & emotions onto animals, but many a time during that month in Brazil, looking up at sloth in repose, I felt I was in the presence of upside-down yogis in deep meditation or hermits in deep prayer, wise beings whose intense imaginative lives were beyond the reach of my scientific probing.

I smiled when I read about them & thought isn’t it amazing how nature has made this animal & the way it behaves, completely non-violent. The way algae (nature) protect them from the predators like jaguars & anacondas. The way it lives; like a surrendered being, not reacting to any action.

Really I’m so influenced by this creature that is a great example of peace, harmony, non-violence & vairagya.  It is an example how the innocent ones are taken care of by the universe. Who knows whether they sleep or really meditate?

May be one day this animal would lead the lost world & show us the way towards harmony, peace, meditation & spirituality.

Love you sloth for whoever you are. 🙂

Hope friends you would also learn something from the sloths.

Have a pleasant day ahead!!!