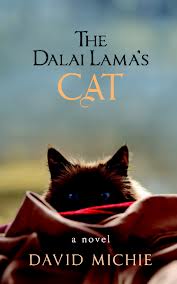 Last night I finished this book. It has been written from a cat’s perspective. How a malnourished slum kitten in Delhi, was rescued by The Dalai Lama & her life afterwards in the monastery in Mcleodganj, Dharamshala. Where she shares room with none other than Dalai Lama himself.
Some light but very good philosophy & learning is there. But some questions have arisen in my mind like how can ascetics have non-veg meals, it’s even gets cooked in their kitchen. I found it quite contradictory that how when the cat hunted the mouse for the very first time, she instantly became the centre of everyone’s hatred because she wounded a mouse, which eventually was saved by the lamas. The Dalai Lama said this to everybody that just like you love your life & don’t want to get hurt, similarly each living being loves its life & doesn’t  want to get hurt.
This is such a simple & understandable philosophy and is the core of dharma.
But very soon I read how meat, chicken, lamb, beef & everything is being cooked there. For the residents also & for the guests as well. I wondered if meat etc. grows on trees?
It shows how easily men have moulded dharma according to his desires. And that’s not all; there is one more incident in the book where a pure vegetarian teenage girl got severe iron deficiency & doctors tell her to eat beef. But as she is a vegetarian she doesn’t want to hurt any living being for her health’s sake. And when she came to meet Dalai Lama how he convinced her to eat not only chicken but beef by giving the logic that when a chicken is killed it only provides meal for one person for one time but if a cow is killed she serves many meals for many people for many times. So, it’s better to kill a cow rather a smaller animal. And when the girl queried further about killing he gave the reason by doing so we are in fact helping those poor animals to improve their future lives. Isn’t it indigestible?
And the writer have shown it with all the comfort without using his own logic I guess.
I wonder what would be the cow’s perspective on that? Would she want to improve her future lives by sacrificing herself for selfish human needs or she would love to live it healthily & happily?
I am amazed how everyone talks about nirvana & enlightenment, about achieving a state where one is free from each & every karma. I wonder again if they are not binding them (karma) further by killing & eating animals? And that too infinite karma for the infinite time… Isn’t it blind faith?
It would be better if they keep living like this without talking about enlightenment at least. Yes, they can talk about world peace, philosophy & compassion as they are meant for humans only and not for the animal kingdom.

Please note that I don’t want to criticise anybody through this article. I just want the solution of my doubts. I apologise by heart if I’ve hurt anyone’s feelings through this.
Happy day!!!
Medhavi 🙂

Yes, I Live Here… But I Don’t Belong To This Place

AN APPEAL BY MAA DURGA TO ALL THE WOMEN