When I Met Hidimba (1) – Dr. Medhavi Jain
Skip to content Skip to sidebar Skip to footer 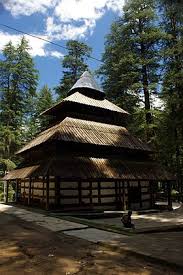 It’s said,’Truth has its own way to express itself’. Though it may take time. And it chooses someone to express it, to get curious to know about it, to explore it and to show itself to the world, that this is what I am like, believe it or not. And of course it hurts as the truth doesn’t wear any cloak of pretentiousness or sympathy. It is always naked. And it shakes our thoughts and beliefs, gives us a shudder. Obviously sometimes we deny to believe it because we don’t want to come out of our previous comfortable thoughts. We have been living like this since ages. Blindly following someone, blindly dedicating our lives to the so called Gods. Surprisingly when we get results from a particular following we start giving credits to that deity; in fact what works, is our belief. People start following our patterns and this results into the mass following, sometimes worldwide. Gradually, that real reason of following loses its identity and what lefts is nothing but blind faith.
Recently I got to read a (hindi) book on Hidimba by Mrs. Natasha Arora.   Got to know Hidimba’s character and her life, closely, a character shortly depicted as a devil in Mahabharata. The truth behind her life, her character, her sacrifices and how she turned out to be a winner in each test of life and proved herself a devi.
This book is an eye opener for those who just blindly follow Religious texts. The writer has raised many thought provoking questions, like:
– Are religious texts beyond questioning?
– Are the great men not answerable to anyone for their wrong doings?
– Why all the scriptures show only one side of the coin?
– Does not it feel like as if the great kings of India had left some chelas to sing the songs of their undone glories? And in turn they have shown the world a way to blindly follow or in short they have misguided the future generations?
– Can we take out something from the silence of the writer of that particular text?
Unfortunately, because of this blind following since ages; our power of reasoning has been erased and we’ve stopped to ask questions. We have forgotten the difference between right and wrong.
This book asks us, motivates us to wakeup and ask.
Please stay connected till tomorrow for the second write-up.
Thanks pals, have a great day and a very happy and prosperous new year ahead!!!
Medhavi 🙂