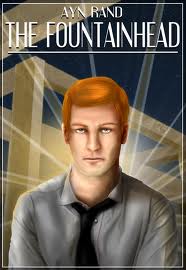 Who are not acquainted with Howard Roark; let me introduce him. He is the lead character of the book Fountainhead by Ayn Rand. He is a passionate architect, who is born for architecture, to make, to create & to design buildings.
But he does all this on his own terms. No compromises, no changes in designs, no annoyance, no tensions and if he doesn’t get that work; no regrets.
The only condition is that that he wants his buildings exactly the way he has designed them. Not even a slight change. Yes, he is like that. And besides this he is so honest, so crystal clear in his thoughts & in his way of talking that someone with a fake heart can’t look into his eyes. If someone laughs at him, he ignores. If someone plays politics against him, he ignores. When a case against him was filed in a court, he hired no defence, instead he fought for himself and didn’t speak out even a word throughout the trial & just before the judge’s verdict when the judge says,” it’s your turn to defend yourself”. He just gets up; go to the judge’s table and put down some of his designed buildings’ pictures and says,” THE DEFENCE RESTS”. And when someone asks him after the trial that why didn’t you defend yourself? He answers,”Would that have been made any difference?” and obviously he loses the case.
I don’t know what kind of a person is he? Does he belong to the same human race as ours? It doesn’t seem like because no one understands him; neither the education system nor the society. There are very few people who understand him & care for him; who appreciate his work. Earning money or fame stand nowhere in his list. He just wants to see his buildings erected, taking shape, exactly as he drew them & after completion if someone destroys that building he says,” it was my task to design that building and see it taking shape. My task is over after that.” He never held grudges for anyone in his heart. He never think of taking revenge. He just live his life honestly.
He thinks that altruism is fake, that no one ever works for a noble cause, all want to get publicised. The only way to serve the society is to create the thing you are truly passionate about. He respects individuality & wants everyone to be individual in his own way, in his own passion.
Now, coming back to real life. I wonder if anyone can even think to live like that?
And if someone dares; would he be able to survive in the society? What do you think?
This is what I have to say about him,” How can anyone be so sure of his existence? How can someone know what he is all about; what his life is all about? I’ve seen these qualities in nature only, in the sun & moon only. Who keep doing their work no matter what.”
Hope I’ve done justice to his character?
Thank you Howard Roark for motivating millions around the world.
Thank you for your time friends.
Have a pleasant evening ahead!!!
Medhavi 🙂

A TRIBUTE TO MY PETS- TIC & TAC